I have cut back on veg growing this year for various reasons but I think most days through summer and Autumn there is something edible. Also a certain amount is frozen for the winter.

So far this year have been loads of strawberries mainly consumed but a few frozen. Gooseberries likewise. Most blackcurrants Frozen but some given to a friend who gave me a pot of jam in return. A little rhubarb eaten, Frozen and gifted. There are Jonagold eating apples, a Bramley and a quince bearing it's first fruit.

Many herbs some of which grow all year and others are Frozen or dried.

Recently I have been picking blackberries both in the garden and wild. At the moment there are tomatoes and lettuce every day. The first beetroot will be pulled tomorrow and I have enjoyed one cucumber. Lavender is scenting the house but I have to leave some for the bees. 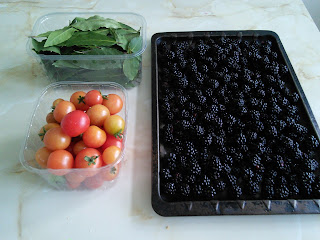 When it's written down it sounds much more than I thought it was!
Posted by Jean at 12:42