Not giving up and little pleasures today


I am still trying to get the hang of blogging. I gave up for a while but am trying again. I am enjoying these beautiful daffodils OH brought me. 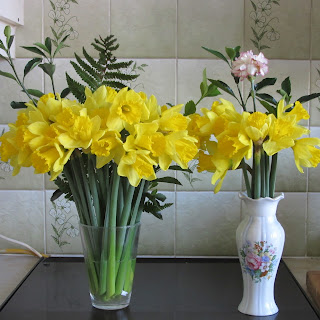 I asked DS to bring me back from Scotland the Sunday Post and some tablet. Tablet is a Scottish sweet which is unobtainable "doon sooth". It is similar to fudge but creamier and very unhealthy so a good job I can't buy it normally. The Sunday Post is a Scottish paper that is more like a magazine. I have it open here at the comic pages of Oor Wullie and The Broons. When we were children my Scottish father had his friends post it to us every week so we received it on Monday and my sister and I would argue over who would read it first. Then later when our children were young I ordered it from the village newsagent and again we got it later in the week but it didn't matter as there is so much in it apart from news. Then my children were brought up on the antics of the Broon family of Maw, Paw, 8 children and Granpaw. Eventually the newsagent couldn't get it so I have to wait until somebody goes to Scotland. This issue is a week late but still a good read and plenty of puzzles to do.
Posted by Jean at 07:45