I like to have a pot of marmalade in the cupboard for the occasional slice of toast and also for a favorite cake recipe. It is so easy and uses marmalade and a bar of cheap supermarket chocolate. Since my food restrictions I can't eat the cheaper marmalade as it contains fructose so I bought a jar of an expensive brand which cost about 5 times the price of my normal one. It wasn't so much the price but I don't really like it.

Over 30 years ago before we moved here, I would make about 501bs of jam a year from fruit from the garden. I also made marmalade and after a couple of times making it from scratch which was a lot of work I discovered Marmade which is a tin of prepared oranges and only needs sugar adding. It still has to be made in the same way as fresh oranges apart from the work of preparing them.

I decided to try it again this week as it has no fructose in it. I made 7 and a half jars and I was amazed that it came out perfectly. No jars broke when I filled them so the sterilizing in the oven went well. Just hope they keep well now. 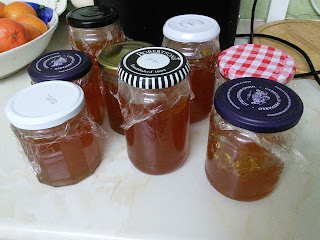 The cake should be made tomorrow.
Posted by Jean at 13:04