I decided to try sourdough bread. It takes ages before you actually can make any bread and once you start maintenance feeding half has to be discarded.  I hate discarding anything so googled recipes using it and there were loads. So today as my last loaf of bread is nearly finished I thought I would make Irish soda bread using the discard. It was quick and easy to make but I didn't have all the ingredients. I substituted milk and vinegar for the butter milk so that was ok. I had baking powder and bicarb of soda but no baking soda and no cream of tartar which I could have added to the bicarb to make the baking soda. I thought I did have the cream of tartar but I was mistaken. I went ahead anyway and just used what I had. To my amazement it looked good so I had to try a little slice with my homemade marmalade and it was delicious. 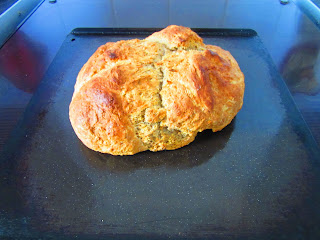 So on the strength of that success tomorrow I will try something else. Either scones or cinnamon bread. I wont be able to make the actual sourdough bread until next week. Waste not, want not.
Posted by Jean at 12:12