We reached Bergen about 7am and after breakfast went ashore. It rained all day on and off which wasn't a surprise as it is known as umbrella city and rains two thirds of the year. We walked up to the town via the Hanseatic area of old wooden houses. Of course we had to pop in to a few shops with very good sales.

We decided to visit the Hanseatic museum first as it looked so interesting and it was. This was an old house which showed what life would have been like for the apprentices, journeymen and managers of this trading association. They weren't allowed to have any naked flames in this building so not far away was the place they went to warm up and have a hot meal. It must have been freezing in the winter although they did have beds enclosed in cupboards.

Not only was the museum interesting, it had free lockers, a drinks machine and a place to eat your own food. We were able to leave our bags and walk round to the other house past some interesting antique shops. 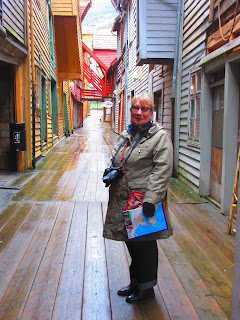 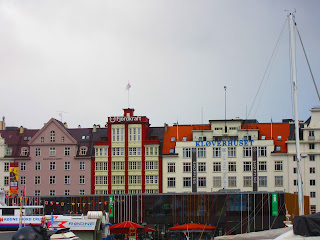 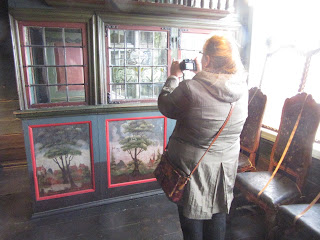 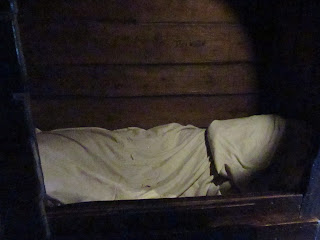 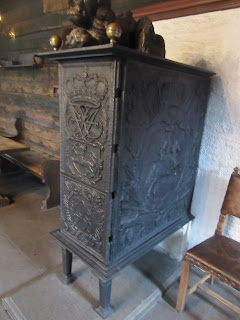 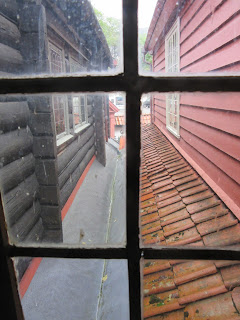 We found another seven eleven and bought very good cinnamon buns for 1NK each which is about £1 so very cheap for Norway. We took these back to the museum and sat out of the rain with a hot chocolate. We had intended to visit the fisheries museum but thought it was near to our ship so left it until later then realized it was too far in the time we had left.

We really wanted a cafe at the top of a building to get some good views but could not find one.  The visitors centre had quite good views but was packed. The fish market was near by and very colorful. I bought some reindeer meat vacuum packed to take back to my Canadian DIL as she misses moose. There was also whale meat but I couldn't buy that! Something we both enjoy is thrifting as C calls it so were pleased to find a huge shop hoping to buy something authentically Norwegian. C found a heavy pewter ladle in a presentation box. It was so heavy we wondered how she would get it back to the USA. She did though! 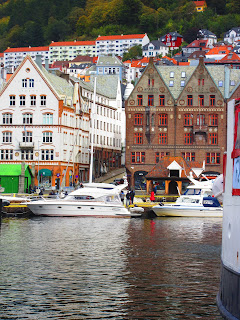 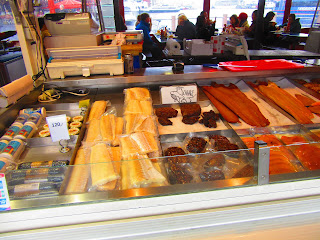 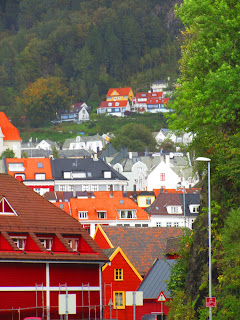 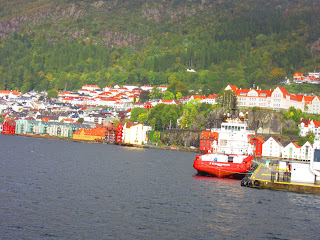 We left Bergen about 5pm and stood on the rear deck taking photos until we felt too cold and wet. We went into the buffet for our usual snack to tide us over to dinner. We noticed they had Clam chowder which I had never tasted but hoped it would be served at dinner. C decided to have some in the buffet and I wished I had too as we never made dinner! The sea was very rough so we went back to our cabin and lay on the beds. I was very sick and although C wasn't sick, she thought she would be if she moved. We found out the next day only one person had made it to dinner.
Posted by Jean at 13:29