Didn't think I would be posting photos today as a very quiet day at sea recovering from sickness. My friend felt well enough for breakfast in the morning so went to reception and picked up some tablets for me. I took one and managed to get dressed but went back to sleep so I knew the pill was working as when I had them once for vertigo, I couldn't stop sleeping. I managed a cup of tea in the buffet at 10 am then went back to sleep but did manage to go for lunch of sorts. I really fancied marmite on toast! We had the marmite as we had saved a couple of cute little heart shaped pots from breakfast one day. But no toast was forthcoming although C tried every which way. I settled on a white roll and marmite in the end.

I found a lovely book in the library called "Nellie - letters from Africa" with a memoir by Elspeth Huxley. C told me it was the account of Flame Trees of Thika and Nellie had been played by Hayley Mills. I had never watched it so after the holiday borrowed the DVD and enjoyed it very much. I only managed to read about half the book and had to put it back in the ship's library but have found a copy on World books and ordered it along with "Out in The Midday Sun". This is the account of the adult Elspeth back in Africa.

So apart from reading and sleeping we did listen to some music in the lounge. It was a formal dinner and I ate quite well then we went to the show called End Of the Pier. It was very good but I was so tired I had to leave before the end and go back to bed with another pill just in case!

Well actually there were one or two photos as I perked up a bit. Just a few of the ship and one of me fully recovered after dinner. 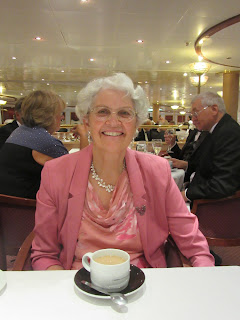 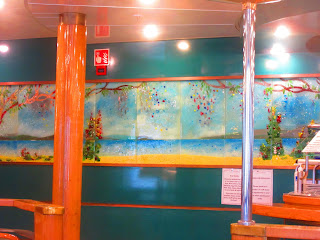 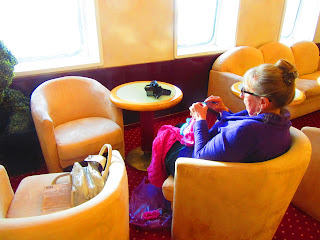 We loved the decoration on the walls and the lamps. C in the lounge and her beautiful crochet. We did like the Astoria very much.
Posted by Jean at 11:10