No I am not talking about Enid Blyton's little wooden man. This was a cake I used to make every week. I don't know why it was called that but it was a recipe given me by a friend and that was its name. I think it was a family joke. It was a boil and bake cake and tasted a cross between cake and bread pudding so quite stodgy but DB loved it so that's why I made it so much. Over the years I stopped making it and when DB asked about it a few years ago, I couldn't even find the recipe or remember exactly the ingredients. I tried a few others from the internet but they weren't the same.

Then I tasted some fruit cake which I really liked and it turned out that was a boil and bake cake but different from my original one. Anyway I make that now but not so often as we don't eat so much cake. The thing with this cake is that I have to remember to boil it in an evening when I can finish it off the next morning so that happened today. It makes two loaf cakes so one is to take to my older sister and BIL when I visit tomorrow and the other is to take to the monthly craft group my friend is starting tomorrow evening. 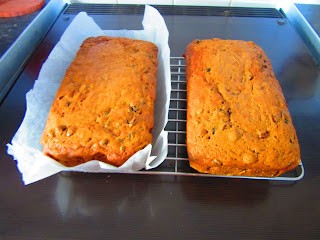 I also made a big pot of celeriac soup and had some for lunch which was delicious. Some in the fridge for tomorrow and the rest frozen.
Posted by Jean at 12:26