Being frugal when you are poorly

My daughter has always been frugal but since she had swine flu and secondary infections over 9 years ago she has never recovered and been diagnosed as having ME or CFS. It is difficult for her to cook from scratch as she doesn't have the energy. She still does pretty well though and doesn't buy ready meals. Every Sunday she has a roast dinner by using frozen veg, unpeeled roast potatoes and a ready prepared joint which can be bought for £2.50 in Asda or Iceland. The joint gives her 2 meals plus sandwiches. She also buys frozen fish and has a piece with home made wedges and peas. So it is possible even when cooking is limited.

I have always had good health so not had a problem cooking. Just recently I am having a gastric problem which has gradually got worse and more frequent. After a 6 month wait I saw the gastroenterologist last week and he thinks its diverticulitis so I am waiting for a colonoscopy. In the meanwhile it has got to the point that eating any solid food causes me to be very ill. After trying a small portion of home made shepherds pie last Saturday I was very ill for 2 days so have gone back to blitzing everything in my nutribullet. I didn't want to throw food away so have been experimenting with various concoctions. I was also able to freeze some items. With a lot going on though I bought some chicken complan and had a portion today. It was disgusting and made me nauseous. So that will be thrown out and as I was so tired I went to Sainsburys for some blitzing ingredients. Happily they have cut loads of their products so I was able to get some lovely things at a good price. Cashew milk was only £1 so pleased with that.

We have had a variety of pets since we married over 47 years ago. Especially since we had the children. Our boxer cross dog from the dog rescue charity arrived when I was expecting ds and dd was 15 months old. She was the most wonderful dog I have ever known and so gentle with the children. We had lots of other animals but no more dogs so it was natural that when ds and dd had their own homes they wanted dogs.

ds wanted a rescue dog but the charities nearby wouldn't let him adopt as he lived in a flat. Then he found out about greyhounds and Wandering Mona entered our lives. After a while dd was ready for a dog so she acquired Beau. I have a beautiful photo of brindle Mona and black Beau cuddled up together but for some reason the scanned photo will not load.

Sadly after 9 months Beau became very sick and had to be put to sleep. It is thought he ate some poison but we don't know how. It took a while for dd to allow another dog into her life but Creamery bypass commonly known as Bill won her heart. He was a really big boy. Meanwhile Mona finished her happy life and ds quickly found Toya Star. She was our fur baby and was loved by and loved everybody. Ds always said that she chose him because when he was stroking her over the half door of her kennel she put both paws around his arm and didn't want to let him go. Ds has aspergers so life can be fraught for him at times but Toya was always there snuggled up next to him. The last few years have been happy for ds as he is happily married then last year his longed for baby daughter arrived. Less than two months later Toya had to go to sleep too and it was heartbreaking but son said it was as if she could leave now as he was not alone. 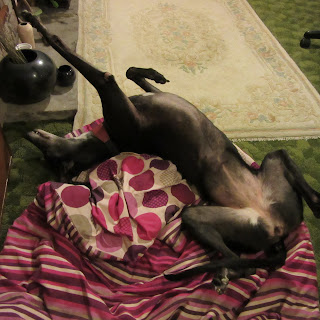 This is Toya roaching - very elegant!

As for dd after bill went it wasn't long before Nugget arrived then a sweet little girl Poppy was back in the kennels for the second time after her owners had become too ill to care for her. She was very distressed and rubbed the hairs off her nose and back so she too went home with daughter.

Greyhounds sometimes get a reputation for needing a lot of exercise but they are proper couch potatoes as long as they have a few short walks each day. Their main requirement is a comfy sofa and company. There are so many of these beautiful dogs needing homes and it takes a lot of will power to resist the pleas on facebook sites to adopt one - or two.