Tales of the river bank

I heard the river had burst its banks so I thought I would go and have a look.  As I reached the river next to the mill, there seemed to be a lot of activity including  Inland Waterways men scratching their heads and peering into the lock. Then I saw why. 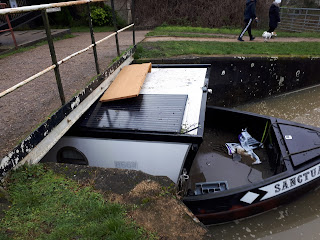 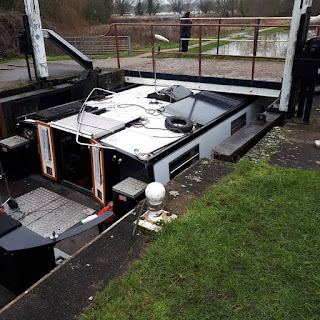 A boat was stuck fast under the foot bridge on its way out of the lock. The river was the highest I had ever seen it and I have certainly never seen a boat stuck under a bridge on the river. The boat owner had never seen it that high either. The waterways man said there was a warning in place not to travel as it was dangerous. Later when I reached the next lock there were more Waterways men there too. The trouble is the water was high there and already lapping over the garden of the old lock-keeper's cottage.

The lane from the lock does flood but I've never seen it merging with the fields. I couldn't resist a little paddle but didn't intend going any further. The men were shouting at me not to risk walking down the lane as it was too deep! I'm not that stupid. 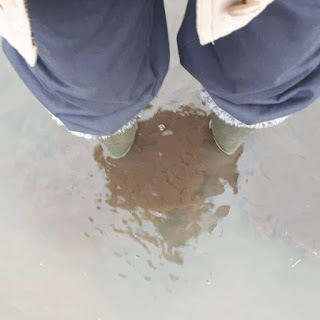 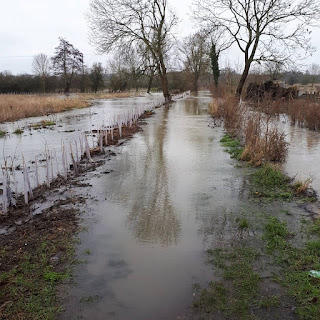 The water is over the tow path and covering the field and footpath behind the mill which I usually walk on the way back. 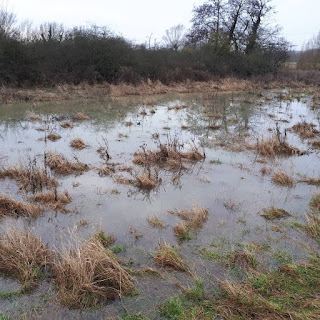 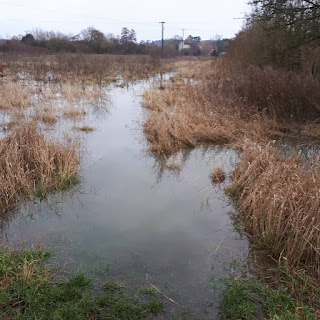 I don't know if and when the boat was released but we had some snow first thing this morning and then it poured for a while so a lot more water adding to the river. I went in the opposite direction today but huge puddles and lots of mud.

It gets its name from a long serving town councillor and was originally called Peldon Park. According to the council web site it is one of Harlow's best kept secrets. Apparently if I am lucky I may see the common spotted orchid or bee orchids. I will have to come again in the spring.

In my quest for somewhere different to walk within current rules I walked down to this park with my walking poles as I knew some of it would be slippery mud and steep. It's a strange place as it is between the last houses on this side of town and the large industrial area. There are good views from the top in several directions but the houses or factories are always in sight. However when lower down the hill there are only trees and I felt I could be miles from any habitation. 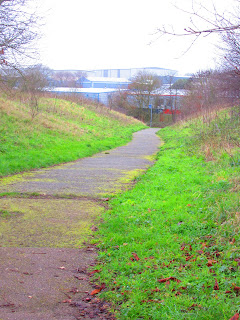 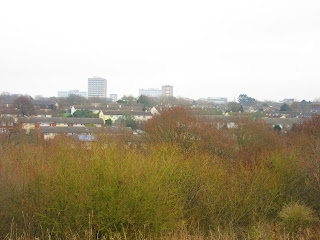 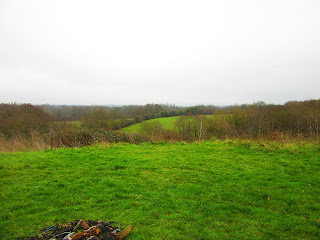 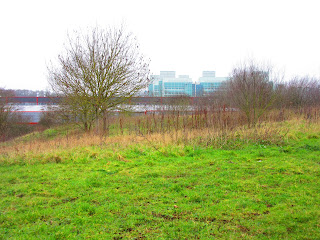 The above pictures are the views from the top and the next ones are the trees lower down. 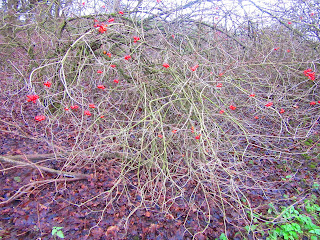 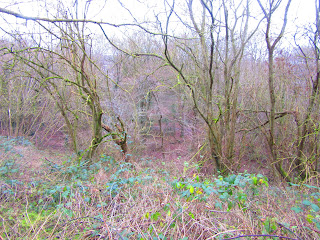 The last time I was here in the Autumn to pick blackberries but I must have missed this tree full of mirabelle plums. Past their best now but still on the tree. Will have to check it out next Autumn. 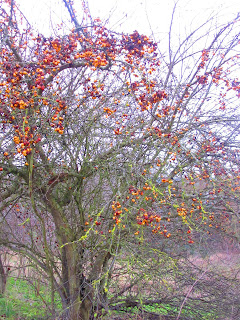 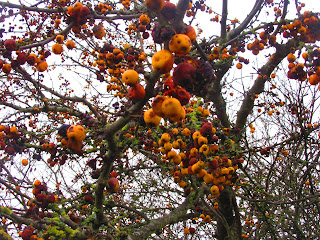 It was foggy all day and I only saw a couple of dog walkers in the distance so felt quite strange. There is a brook at the bottom of the hill but the path was steep and very muddy so I didn't attempt it.

I always buy a paper on Saturday with a TV mag. Then I look through it and mark anything interesting. Often I start watching a program then find its not for me. Recently I have been watching John Roger's walks on You Tube. I found out about him from another blogger and I'm hooked now. Lots of his walks are in London and I used to do a lot of walking in London so it's good to see places I recognise. He has also walked a lot of the Lea and the Stort which is my walking patch.

After reading Simon Reeve's biography I found some of his early travels on You Tube which I enjoyed.

It was a surprise this week to find there is quite a lot I would like to watch. Last night all I watched was Mighty Cruise Ships on Quest as it was a trip on MS Roald Amundsen to Antarctica. It is an amazing new ship that can go to places which were impossible before. Tonight I watched Ben Fogle's New Lives in the Wild on catch-up as it clashed with the other program. There is a new series at 7 pm on BBC4 - New Winter Walks and I was particularly interested tonight as the walk was from Ravenscar to Robin Hood Bay. Some years ago I was planning to visit the area and stay in the Youth Hostel at Boggle Hole. Lots of things have stopped me going although it is still one of my plans. It was great to see the Hostel as the walker, poet Simon Armitage stopped for a cup of tea there. Then later there was This Farming Life with wonderful scenery again and now I have on a new series of The Thames with Tony Robinson. As you can see I like documentaries. I can't stand sitcoms or soaps. Especially this year when we are stuck at home it is good to see other places even if it is only on TV. Lots of places to look forward to seeing in real life. In the meantime I am trying to really get to know my own neighbourhood.