old friends.  I have been friends with J for 35 years when she moved a few doors from us. We just gelled from the start and in spite of her moving first to Manchester and now Cumbria and us moving from Hertfordshire to Essex the friendship has lasted.

She is 20 years older than me but doesn't matter except that she can't get around so much as she did so more effort to get together. Last week I managed a few days by travelling on the overnight coach each way so we could have a few days together and then I wouldn't be away too long from DB who is disabled and needs carers while I'm away. 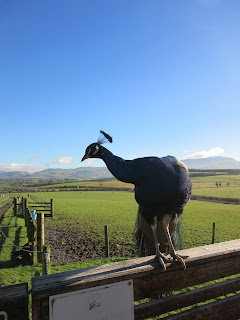 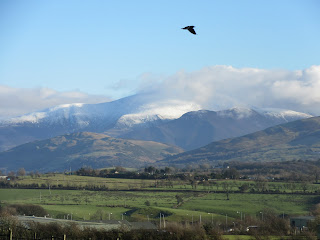 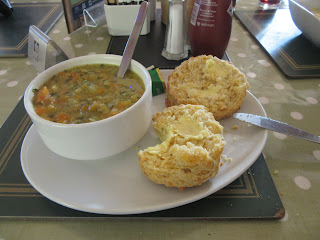 The soup and cheese scone were delicious and so was the naughty mars bar cake!

We then had a trawl around the charity shops and some good finds which I will photograph and show next time.

The coach journey wasn't too bad and I did manage to sleep on and off for about 6 hours on the way up and about 5 coming back. I don't know why I was surprised but loads of people walking about 6am Sunday morning in Victoria and plenty on the tubes. Glad to get home and catch up on some sleep.
Posted by Jean at 09:48 No comments:

I had an email from the library to say my reserved book was in so after a busy day I set off on the 10 minute walk to town at 4.45 to collect it. I decided it was too early for yellow stickers at Asda or Sainsbury but the Tesco Metro is near the library and closes earlier than other supermarkets so I went to collect a free magazine and have a hunt for bargains.

This is what I scooped up 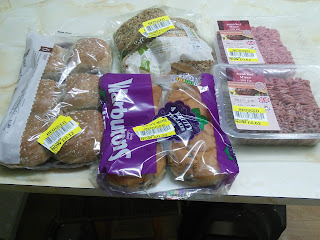 So along with the magazine and free reading from the library a frugal day. Nothing else spent since £1 on Saturday for my weekly treat of Newspaper mainly for puzzles and the TV/Radio mag.

Dinner was also frugal and quick. Previously cooked pork steak in mustard sauce with mash and veg along with some leftover bits from the fridge. The pork had also been yellow sticker.

A good result at the hospital earlier too for DB as they decided his painful knee and hip are due to a bad back so he is being referred for an MRI scan and then hopefully some treatment.
Posted by Jean at 11:36 No comments:

Call the Midwife and nostalgia

I have just watched Call the Midwife set in the hard winter of 1962/3. Lilbitbrit mentioned this in her blog after she watched the Christmas special as she remembered that winter.  So do I as I was 12 years old and during the holidays, my friend and I asked the baker delivery man if we could help on his round not for money but just for the excitement of being out in the snow. We sat on the back of the van with our legs dangling and the doors fixed open.  No health and safety in those days. I don't think it would be allowed today. My parents weren't at all concerned. We received Co-op chocolate as an unexpected reward.

It got me thinking how much childhood has changed in the last 60 years. In the school holidays there were no organized activities by our parents. My dad was at work and my mum too busy running a household of 8 people with no modern appliances to help. In the summer we spent all day over the fields or the park with our friends. If it was too wet or cold we played endless games of monopoly or amused ourselves with anything to hand. We never longed for the holidays to end and to be back at school because of boredom. I think too much organized activity is not good for children as they need to learn to entertain themselves.

Anyway I enjoyed the program this evening as usual.
Posted by Jean at 13:35 No comments:

I see that a couple of bloggers cut their own hair. No way I could do that but DB used to cut his and mine with a flowbee. If you have never heard of it there is a video on youtube.

It has a tube which fits on to the vac and the cutting device goes at the other end with guides for cutting different lengths. We kept a note of the guides for each of us so a hair cut took about 10 minutes, was free and looked good. Since DB had a stroke 3 and half years ago he isn't able to use it and I would never be able to do it.

So the problem - I hate going to the hairdressers, it is time consuming and costly.  I have now found one where there are no appointments so I take a book or go early in the morning so no waiting. They charge 1 price for each service. Wash and cut counts as one so £11 now. DB has found another shop which does pensioner specials and also trims his beard.

I would quite like to just sit quietly while being worked on but there are the usual questions such as what are you doing this evening? Answer - going to bed. Have you booked a holiday, what have you been doing today etc.  Yesterday I discovered that mentioning new grand daughter was the best thing to do as people always want to tell you about their children, grand children and opinions on child raising so not as bad as usual.

The other problem with a hair cut is itchy hair down my back but with the flowbee the vac sucks it all up as it is cut.
Posted by Jean at 07:20 No comments:

...and forward! Well as it is already half way through January I thought it was about time I looked back at 2017.

So did I accomplish anything I had planned?  Yes and I'm quite pleased about them.

I made a bag out of material I had bought in Amsterdam the previous year.
I planned and enjoyed a week in Scotland on my own. I did lots of walking, visited Knoydart which has been on my wish list for years since I read it is the most remote place in mainland Britain. I finally travelled on the West Highland railway line between Glasgow and Mallaig which was breathtaking.

I wanted to have more days out and breaks as the previous year I only had 2 nights with a friend in Amsterdam and a less than a week visiting friends. I really enjoyed those breaks but wanted to do more. I only had a couple of days out as well but last year I had some lovely days out often using my bus pass and doing lots of walking. I also managed a week away with DB which can be difficult with his disabilities but it went really well and we both enjoyed it so planning to do it again this year.

One thing I didn't plan but has brought great joy was the birth in October of our first grandchild - a girl.

So plans this year are to enjoy being a granny.

I also want to get back to sewing and bought a new sewing machine in the sales which I am pleased with. I have saved lots of pins on pinterest and the first thing I want to make is a backpack from the rest of my Amsterdam material.

The other plans are possible moves for some of us but that will take a while to accomplish.
Posted by Jean at 10:50 1 comment:


Although I am fairly active I have wanted to do more organized exercise for a long time. I like swimming but not indoor pools. I can't stand gyms so thought I would try a Keep fit for over 50's yesterday run by an over 50's association at a community centre.

It lasted an hour and a half which I felt was too long and to be honest I found it really boring. Apart from moving a few steps either side we stayed on the spot. It was mainly stretching our arms to music but to a routine which we are supposed to remember until next week. No chance!

There is circuit training at the same place but at a time I can't do at the moment so I think I will just have to stick to my daily walking. When the weather improves I may start using the free outdoor gym in the park. I could just put my own music on at home and bop about to that. Even better it will be free.
Posted by Jean at 15:21 No comments:

Some bloggers list 5 frugal things they have done all week but by Friday I can't think of anything but I know I am frugal so I thought today "what have I done?"

Well after decluttering I had plenty to take to the charity shop so rather than driving to the out of town shops, I loaded my shopping trolley and walked to town so saving petrol.

I also took a library book back thus avoiding a fine though I can renew on-line but I had finished with the book so better to take it back.

I also went into the post-office which annoyingly has been moved into Smith's so very cramped but not too bad on Monday morning. It wasn't frugal as I was sending photos of our grand-daughter to the other gran who lives in Canada. She is profoundly deaf and doesn't have any digital devices. She lives out in the wilds and the connection is very poor. The frugal bit is that I won't be sending any more as DIL is sending all photos via internet to her auntie who lives in the city. She will load them all on to a memory stick and give to her sister when she visits. She can then get them developed over there.  I do feel sad that she will only see our dear little grand-daughter once a year and she can't even see her on skype or face-time.

This afternoon I started making a post-bag to hang behind a letterbox to collect mail for a disabled person. He had a basket but there wasn't room to fully open the front door then and he finds it difficult picking it off the floor. I am using an old curtain so if it doesn't work it doesn't matter too much plus it is giving me practice on my new sewing machine bought in a sale.

I also had planned leftovers for dinner padded out with extra veg so nothing wasted.
Posted by Jean at 13:27 No comments:

I didn't need much shopping this week so thought I would walk the 5 minutes to the supermarket after 6.30 to see if I could get any bargains. I picked up 3 packets of pastry reduced from £1.30 to 39pence. 2 went into the freezer and I will use one tomorrow. 2 packets of good cumberland sausages half price and also frozen. The best buy was a whole trout reduced from £2.25 down to 54 pence. The other bargain was half price Skyr which I had in Iceland and liked but it is usually too expensive here.

The other purchases were milk, porridge, powder milk, sweet potatoes and bananas. Other than that I have plenty in the freezer and cupboard.

I bought plenty of vegetables when they were so cheap before the holiday and they are in the freezer too.

So now my shopping chore is done maybe I can get on with a few more projects this week.
Posted by Jean at 14:02 No comments: