but no people so easy to social distance. Walking is so restricted at the moment not just because we are in tier 4 but also the footpaths are so muddy and many are flooded. I was desperate to go a bit further than the tow path on the river so planned mainly to walk on roads which go nowhere except to farms or the odd house. I planned a circular route along to a village then by lanes and a farm track to the next village and back up to the river and home. 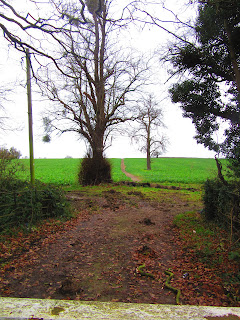 I hesitated at this footpath thinking it didn't look so muddy but a closer inspection showed it was. 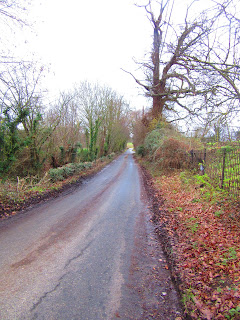 Easy walking on the tarmac. 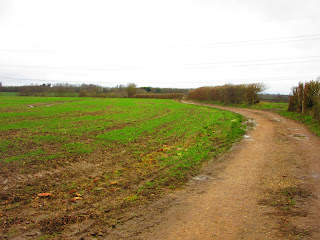 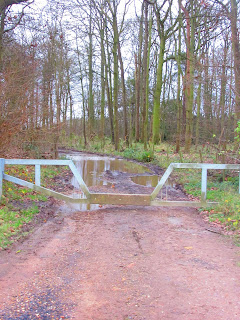 Another bit of paddling and just about squelched through. 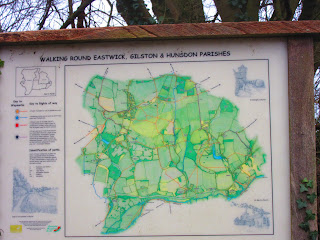 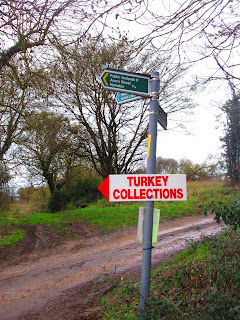 Lots of well marked footpaths around here. One sign pointing to the turkey farm. 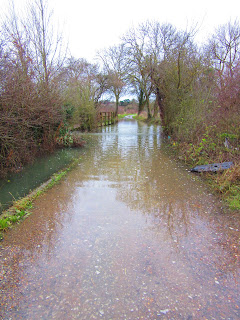 I had intended to walk up this lane to the river and then home but as I inched through the water, it rose higher and higher until it was nearly over my wellies and just before the little bridge I was aiming for, the stream was pouring over the footpath. I had to go back to the main road which I had just crossed from the village, then cross back as there is no footpath on this side of the road. I walked up to the roundabout then along the road home. I was pleased in the end though as a beautiful red kite was low overhead really nearby until it suddenly dived behind the trees. Another bird was higher up and further away but I couldn't see if it was another Kite or a buzzard. 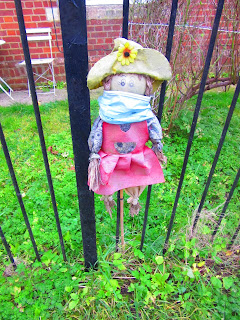 This made me smile. Someone had tied these little scarecrows with masks on to their fence. 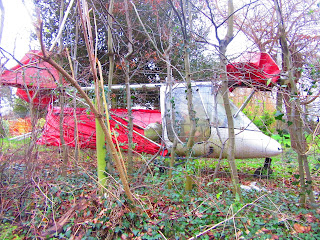 I was surprised to see this little aircraft in somebody's front garden. There is an airfield nearby where they take off and land but have never seen one in a garden. Still lots of birds and berries around too. Always feel better after a good walk. This one according to Google was about 4 miles.
Posted by Jean at 12:04 7 comments:

Felt like some pudding yesterday so tried out a recipe I have had for a while. It is rocky road cooked in a mug in the microwave. My usual rocky road is very popular but it is really for sharing otherwise I eat too much. I must say I was very disappointed with this version as it was so dry and the marshmallows spilled over the mug and made a terrible mess which was hard to clean. That recipe went in the bin.

Apart from that I have stuck to old faithfuls. Cheese scones, fruit scones and bread pudding the last of which I haven't made for over a year. I make a huge quantity and usually take it to our bible meetings to share with a cuppa afterwards. As all the meetings are on Zoom I decided to take some round to a few people who I know love bread pudding. They are all about my age and the men particularly remember their mums making it when they were little boys. It was done socially distanced with the parcel left by the door and me standing at the end of the path. They all live within walking distance so no illicit traveling.

Through another blog, I came across a guy called John Rogers on Youtube who does walks mainly in London and the outskirts. I found one where he walked from Chelmsford to Maldon along the river. In October before restrictions kicked in I took the bus to Chelmsford and walked along the river but not so far. I am planning the whole walk next year when there are longer hours of daylight. I like to have some outings to look forward to.

We are in tier 4 now so will be staying close to home.

When I was a child I loved jigsaws. DB did too so we did the occasional one when we were married then as time went by two children were added to the family and DB's uncle often came to stay. In the winter we would buy a large puzzle of about 3000 to 4000 pieces and we would all tackle it on the dining room table. More time went by Uncle died, the kids grew up and the jigsaws ceased.

Then a couple of months ago my friend bought us a jigsaw with a picture from the 50's which was our childhood. I loved the picture but also really enjoyed assembling it. I forgot how relaxing it is. So I ordered one from Amazon as we were in lockdown but it didn't come until today. After lockdown I found a country scene puzzle in a charity shop. Then this morning I did my early morning shopping in Asda and as The Works looked empty I popped in to get some diaries. They had loads of jigsaws and I didn't intend to buy one until I saw "Amsterdam Canal". A few years ago I had a great weekend in Amsterdam with a good friend and all the memories came back so it came home with me. So now I have 3 more jigsaws to keep me busy through the winter. Sadly DB can't cope with jigsaws now so I get to put the last piece in. 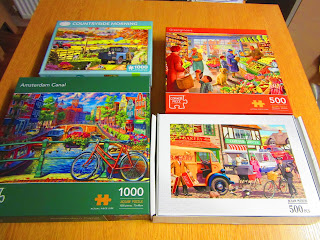 I now have to find a larger board for the 1000 piece puzzles.