Friday was a beautiful day and I was on dog-sitting duty while DD was off looking at park homes with a view to buying one. So I decided to spend the day in the garden as there is so much to do.  I also seem to have got my energy back after a course of Chinese herbs to help my gut.

My plan of action was to clear the 3 raised beds in which I usually grow vegetables. It all went a bit to pot last year due to poor health and not being able to eat much of what I normally grow. I also hoped I would have moved by now but I can't do that until DD finds somewhere to live and moves out.

Anyway I started with the nearest bed where I had grown edible flowers a couple of years ago and they had seeded and spread. It looked a mess so I just left one little beetroot plant which had somehow survived the winter and a few of the flower plants around the edge. 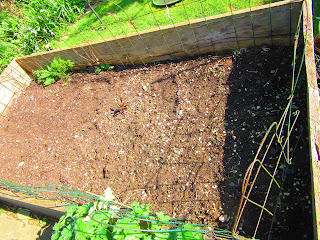 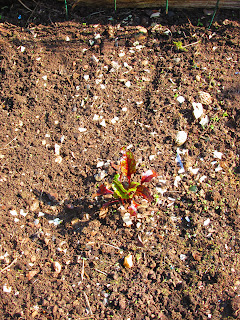 Next was the strawberry bed or what was left of the strawberries after the drought last summer. The last two years have seen bumper crops after I replanted them so I was hoping for one more good crop. I had lots of plants which had crept out of the bed and spread themselves around so I dug them up and put them back into the raised bed. There were more than I thought and they ended up a bit higgledy piggledy but hopefully they will be ok. It also left more room for the rhubarb which is near one of the blackcurrant bushes. 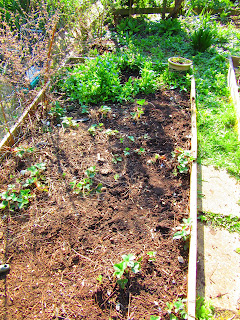 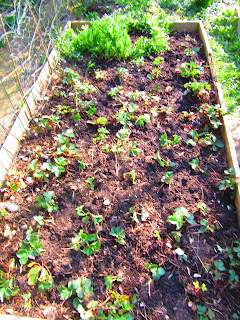 Before and after of the strawberry bed. At the top is some lemon balm, some of which I have left. 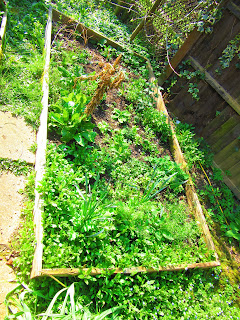 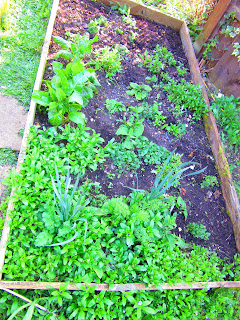 The top picture shows how neglected this bed is and as I don't have any immediate plans for this space, I left lots of forgetmenots, a couple of Welsh onions which flower and have pretty seed heads every year.  There are also two spinach plants which have survived so I will start picking the leaves and hope I can tolerate spinach this year as I love it.

I also started cutting back dead stuff which I leave over winter for the birds when it goes to seed. Then today I made a start up near the house, beside the patio on digging up vinca which my neighbour planted years ago and it just strangles everything so it is a never ending task to eradicate it even though it does have pretty blue flowers.

The trouble is the more I do, the more I see that needs doing. Anyway it is lovely and peaceful in the garden with lots of birds flitting to the feeders and the bird bath. I love the goldfinches which are so pretty and have a lovely call.  On the subject of birds, while in the nearby village I saw a red kite soaring overhead which really made my day.
Posted by Jean at 12:32