washing windows and other activities

The other day I cleaned the windows with a so-called ethical product which was a little pellet which is dissolved in a bottle of water thus cutting out plastic bottles. I'm not very good at this job but I have never been this bad. I could hardly see outside afterwards. Anyway after consulting my vinegar book, today I cleaned them again with warm vinagry water then polished them with scrunched up newspaper. They now look brilliant so I will definitely keep to this method in future. Its very green as well. The tip given in the book is to clean from top to bottom on one side of the glass and side to side on the reverse. This way if you do get smears it is possible to see what side they are on.

Activities in the kitchen involved making a batch of marmalade from a can of mamade. I used to do this when the children were young then got out of the habit until over a year ago I had an urge to make it again. That batch is used up now both by me and as gifts.One new jar already been gifted as I find people love being given some home made goodies.

Today I made a big batch of my version of bolognese sauce. Pre-lockdown I bought ys low fat mince and put it in the freezer so I used that along with a tin of tomatoes and loads of veg from the fridge. Some has been eaten and some is frozen for a quick meal another time. The other day I made a big pot of carrot, tomato and lentil soup. Some of that has been frozen too.

I am enjoying my walks and discovering new footpaths. 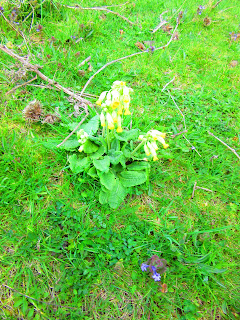 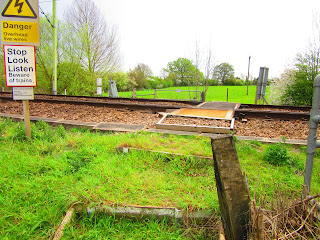 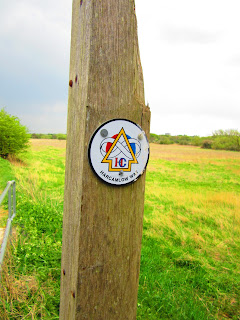 The first picture was one of several of what I think is a cowslip but I do wonder if its a bit big for that and maybe its an oxlip but they are much bigger and I've never seen them around here. Its beautiful anyway.

Then part of a walk which I've wanted to do for ages but it involves walking a footpath which crosses the golf course. It is a public path but there is always the risk of getting hit by a golf ball. Of course at the moment the golf club is closed so I managed the whole circular route which also meant walking across a main railway line. That always makes me a bit nervous but there aren't as many trains as usual at the moment and I was very careful. About five minutes later the train came. The last photo shows a sign for one of the long distance footpaths - the Harcamlow way. It is 141 miles and runs a figure of eight course between Harlow and Cambridge.

I meant to post this last night but had gremlins in the works so abandoned it until I was more awake.
Posted by Jean at 03:23