A walk in the park

I haven't had any proper walks this week as I was afraid of falling on the ice. Normally I love to get out and walk in snow but this snow was so thin it just turned to ice and was treacherous to walk on. As our local hospital has ten wards of covid patients, I do not want to end up there.

Apart from a few patches the ice has melted so after taking DB to his weekly appointment at the ulcer clinic as it was a bright but bitterly cold day I went for a walk in the park. Pet's corner is closed but lots of animals are in the paddocks and they do make me laugh. Here are alpacas, llamas and goats. 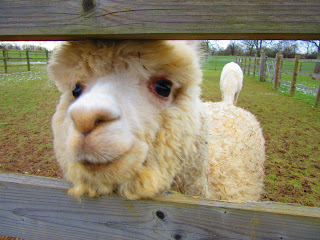 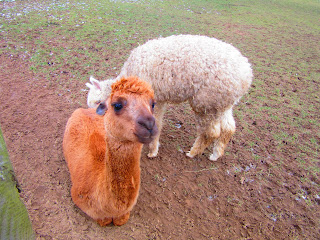 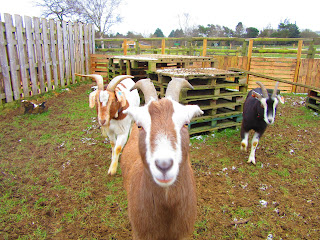 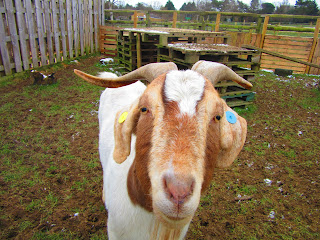 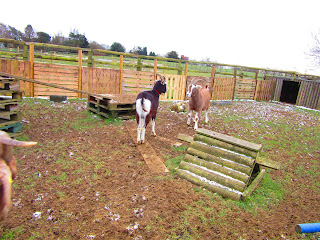 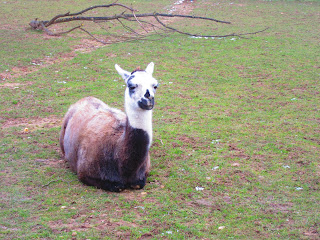 I walked along to the water gardens to see if I could spot the pair of mandarin ducks that are hanging out there. As I got near I saw DS with little GD watching the ducks. He was trying to wear her out. Not much chance of that. He told me the ducks were the other side of a wall and that also they had seen the kingfisher. We used to regularly see a kingfisher around this spot but not recently. Some years ago when DS was still a child we were standing by the pond and a kingfisher was sitting in the tree right next to us. A man came along and obviously hadn't seen it so DS told him about it. He was amazed as he had never seen one before. I took some photos of the ducks. 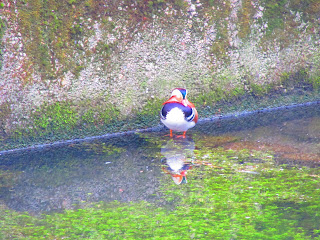 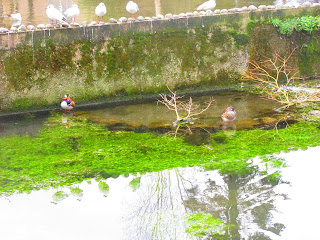 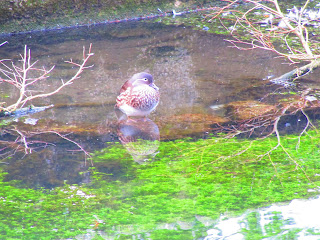 The female is much plainer than her mate. We followed the stream as we thought the kingfisher might be further along and sure enough we caught that wonderful flash of blue as it took off.

It takes ages to walk anywhere with little GD. It is lovely though to see her delight at all the simple things. She collected lots of cones to take home for the squirrels in their garden. She loves the animals and pushes her face through the fence to kiss the sheep. One of them kept bleating really loudly right in her face and she thought that was hilarious. She doesn't seem to feel the cold but we were with all the standing around so I started playing chase with her to get her moving. She loves it but I was so tired when I got home, I fell asleep on the sofa. I doubt if GD did.