Frugal food and a new gadget

I was pleased that I had picked lots of blackberries during the hot spell and made bramble jelly because the ones near here seem to have rotted in the rain. Last weekend there were still some so I took a box and my rucksack on my walk. I had to drop something into a friend and there is a cut-through near her house which goes past the community farm. It has been closed for ages but the gate was open and a box of veg and fruit with the message to "help yourself, donations welcome". I didn't have any money on me so hesitated then I saw a bag with cooking apples which I thought would go well with the berries. I saw some people inside and called out that I would donate next time. They were happy with that although actually they are happy for it just to be taken if you need it. I will make sure I have my purse next time.

I found quite a few blackberries at a pleasant spot with benches and a good view. Then I started home via another bramble spot and was doing quite well there. Then I espied apples on the ground. I managed to find 9 good windfalls which went into my rucksack with the others.  I spent a pleasant evening preparing apples and cooking them with the berries. Most have been frozen.

Then a few days ago a friend called and gave me produce from her allotment. 3 large potatoes which were delicious, a large beetroot which has now been cooked, several bulbs of garlic and more apples. These were made into a large apple cake. The garlic was very handy as I was cooking spaghetti bolognese that evening and only had powdered garlic which is fine but fresh is nice.

Today I had a walk in a village a few miles away and was surprised to see so many good blackberries. So I will go back with a box and collect a few more. I am keeping my eye on an apple tree along the river. I have never seen so much fruit on it but it needs to mature a bit.

The new gadget is a Danish Whisk which I bought from Amazon and I really like it. 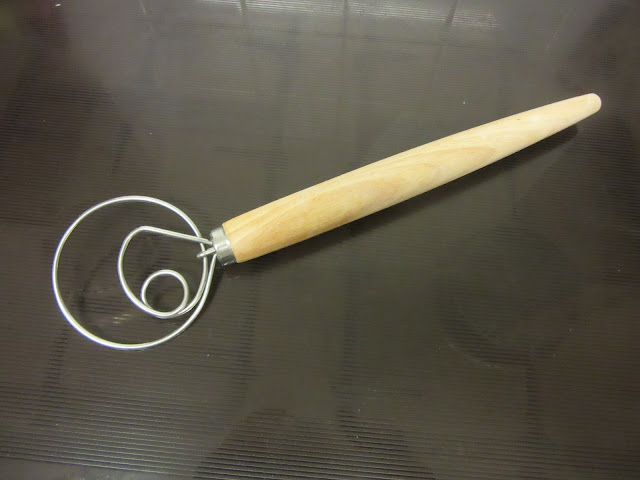 I have been amazed how easily it mixes ingredients up. Even little GD who is not 3 yet mixed her biscuits up with it. It is much easier to clean than most whisks and less washing up than an electric whisk. It is very solidly made as well. I do love a simple gadget.