The garden was really closed for the winter but they have open days for various events and we went to Autumn colors on the Sunday. This place is well known to us as DS used to do one day a week working in the house on archiving and sorting the books out as he used to be a librarian at school. There had been a spider infestation upstairs so when it was treated all the books were tossed higgledy piggledy. DS used to have lunch with Lady Gibberd and wander the gardens on his own so he felt like all the other visitors were intruding on his space when we went on the open day.  The garden was created by Sir Frederick Gibberd the master planner of Harlow New Town between 1957 and 1984 and is acknowledged as being one of the most important 20th Century gardens in the country. 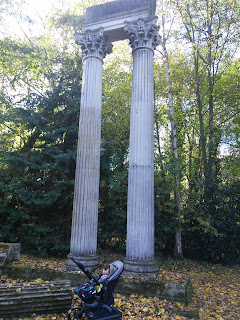 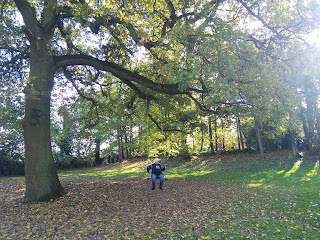 Daughter in law on the swing. 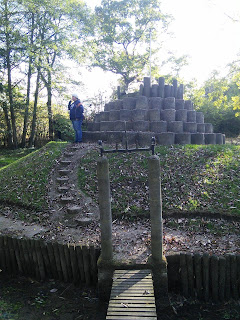 We are looking forward to seeing little grand daughter playing on the castle when she is a bit older. 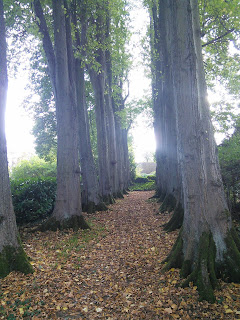 I love this lime avenue and the smell in the summer is wonderful. 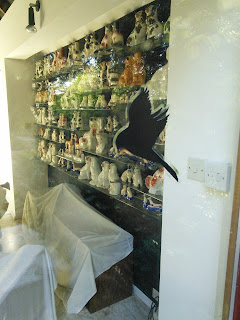 I took this through the window of the house as nobody lives there now and some Sundays it is open to visitors. On the website the opening picture is of this dresser full of pairs of matching dogs. My dad who came from Glasgow would have called them Wally dogs. They were arranged as an art installation by Freddy years ago and after he died were never moved and covered in dust. Lady Pat couldn't get any body to clean them so I volunteered. I was quite nervous as they had to be kept in the exact positions. So I did one glass shelf at a time and carefully lined all the dogs up in the right order. It took me all morning. I refused to be paid for it so my reward was to be allowed to visit the gardens when they were closed from time to time. I used to enjoy that and the condition was I went in to have coffee with Pat and a chat which was so interesting.

We went in to the tea room for lunch of soup and bread and pots of tea. It was very reasonable and the soups all home made. The others told me they were all delicious but I couldn't eat them due to being on this elimination diet. I took my own in a flask.

It was such a lovely day out and again near to home.
Posted by Jean at 12:36