Mostly a dreary wet day but it brightened up at lunch time so DD and I took Poppy greyhound to the park. We hadn't gone long before grey skies and rain appeared again so we cut the walk short but I took some photos of the information boards. 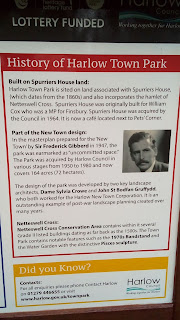 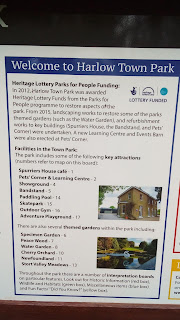 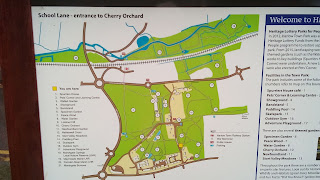 You might be able to read it if you click on the photo but the map shows it is huge. Apart from the main area there is a footpath that goes under the main road then over the zig-zag railway bridge and the park continues along the river side for quite a long while then there are footpaths and walking areas on the other side.

Freddie Gibberd was the master planner of Harlow New Town. I never knew him but I did get to know his lovely wife Lady Pat. Freddie was secretary of the concrete society which I had never heard of until his wife gave me a book about his work. He also designed the Liverpool Catholic Cathedral nicknamed Paddy's wigwam and if you see a picture of it you will know why its called that!

People either love his work or hate it. Personally I think he did a good job with Harlow as there are so many green spaces and trees. Some people spoil it but that is the same everywhere and not his fault.  It suits me to live here as there are lovely walks and also its easy to get to London on the train. This side of town is near the river, the railway station, the hospital and shops. The main problem is the parking as few people had cars when the town was designed.
Posted by Jean at 12:17