I love reading but don't get a chance to do much nowadays. On the cruise I borrowed a book from the library called Nellie, letters from Africa with a memoir by Elspeth Huxley. Christine told me that Nellie was played by Hayley Mills in the Flame Trees of Thika which I had never seen. I enjoyed the book but only managed to read half on the holiday. I found a copy on world books and bought it along with "Out in the Mid-day Sun also by Huxley which I still have to read.

I have finished the book now and thought Nellie was amazing. She finally died at the age of 92 and right up to the last had projects going on. She lived through tremendous changes in Kenya which started as settlers beginning a farm and ended with the white settlers leaving. Nellie in her 80's left Kenya and settled in Portugal living like the locals and always finding new things to learn.

I did also watch Flame Trees of Thika and enjoyed it especially the scenery and the animals. 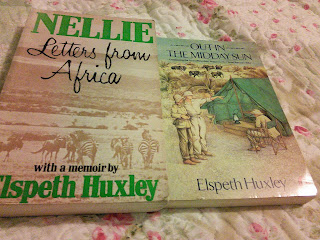