We were disappointed at missing two fjords but the previous evening we heard from another passenger that there was an excursion boat leaving at 10 am for a 3 hour cruise down two fjords. We got an early start so we could buy tickets as we thought half our ship would be trying for tickets. We did get our tickets, standing in the pouring rain waiting for 9am to buy them then they took pity on us and sold them early. We shouldn't have worried as the boat was half empty.

The boat went along Hogsfjord and into Lysefjord up to Pulpit rock and a beautiful waterfall. Some people left the boat part way to trek to Pulpit rock. The scenery was stunning with waterfalls, islands and huge rocks. Some goats came down to the boat as the crew feed them carrots.  It is a wonder how they climb up such steep rocks. 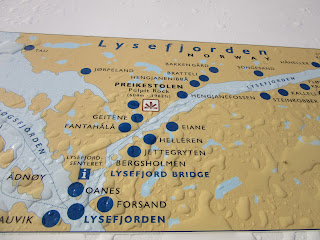 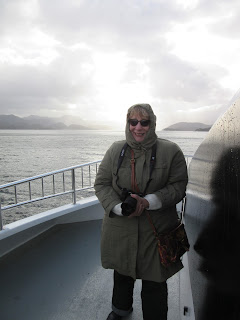 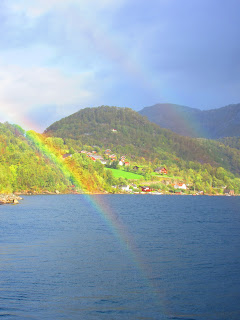 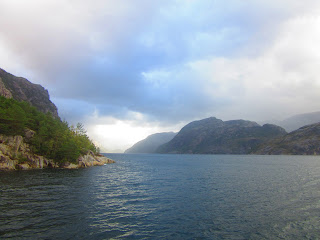 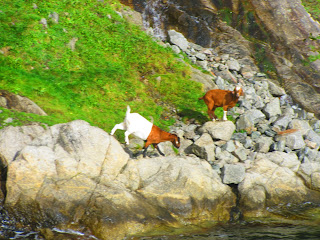 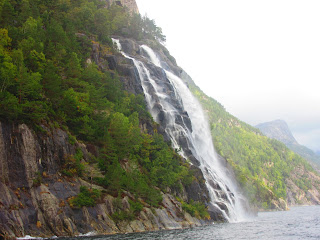 We left Stavanger that afternoon into open water which was very rough but we both felt ok. We then sailed in sheltered waters between the coast and the many islands. It was so peaceful sitting in the little lounge watching the coast line and islands go by. After dinner we went to the cinema to see the Darkest Hour about Churchill. It had been 5 years since I last went to the cinema! It had been such a lovely day and we were rocked off to sleep through the open sea.
Posted by Jean at 12:18